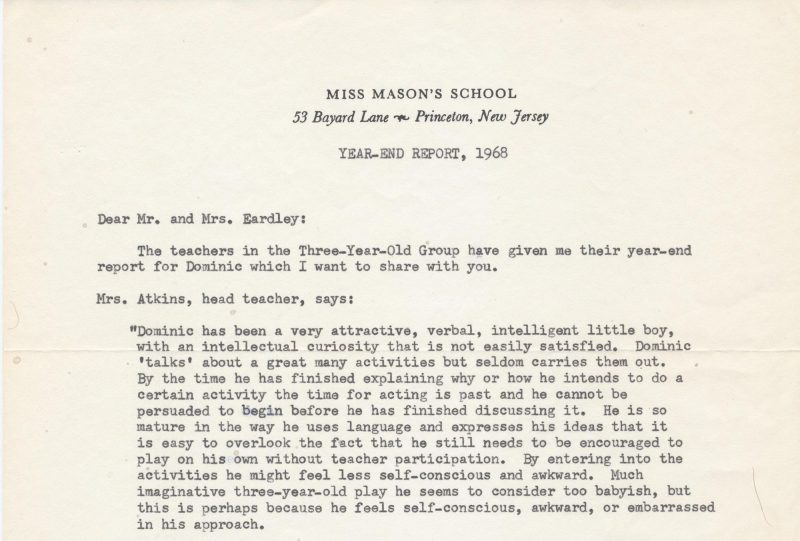 The teachers in the Three-Year-Old Group have given me their year-end report for Dominic which I want to share with you.

"Dominic has been a very attractive, verbal, intelligent little boy, with an intellectual curiosity that is not easily satisfied. Dominic 'talks' about a great many activities but seldom carries them out. By the time he has finished explaining why or how he intends to do a certain activity the time for acting is past and he cannot be persuaded to begin before he has finished discussing it. He is so mature in the way he uses language and expresses his ideas that it is easy to overlook the fact that he still needs to be encouraged to play on his own without teacher participation. By entering into the activities he might feel less self-conscious and awkward. Much imaginative three-year-old play he seems to consider too babyish, but this is perhaps because he feels self-conscious, awkward, or embarrassed in his approach.

Dominic's love for words and precocious use of them comes into full play in both our phonics program and story time. His diction is perfect and his grasp of sound relationships is phenomenal. During story time he can always be counted on to contribute more than any teacher could possibly expect in the way of replies and new ideas. He listens to stories eagerly and with a high level of comprehension, taking the further step of drawing conclusions relating to the story material.

Dominic finds painting difficult because he does not correlate it to expression of an idea. To achieve results other than a few dabs on the paper requires my constant prompting and encouragement. He has begun to show slight interest in some of the other art activities. It helps if he can see that there is some practical application involved.

Mrs. Schneider, the music teacher, reports that Dominic seems less able to adapt to the music group than earlier in the year. He does not always sing in tune though I know he is able.

Dominic has made great strides this year in relating to the world around him and in learning to like and respect his peers sufficiently enough to show a real interest in their rights and feelings. I feel he is trying hard to accept situations as they are, not as he would like them to be. He is a most delightful and challenging little boy."

I am happy to give you this report of Dominic's progress this year. With all good wishes to you and to Dominic for a happy summer.